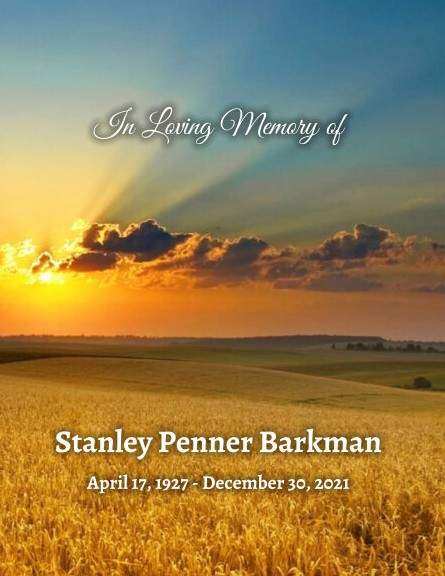 Our dear father, Stanley P. Barkman was born to John J. and Anna Penner Barkman on April 17, 1927 at Greenland, MB. His Christmas wish was granted, Dec 30, 2021 when God picked him up and carried him home. He peacefully passed away, reaching the age of ninety-four.

He gave his heart to God and was baptized into the Church of God in Christ, Mennonite, May 16,1940. To these vows he was faithful.

As a young lad growing up in the great depression, Dad remembered not having many toys and working with horses in the field. His parents provided well for him and his older siblings, three brothers and one sister. His mother passed away in 1960.  In 1961 his father married Mary Wiebe from Linden, Alberta. Dad’s father passed away in 1981.

Dad found his life’s companion in Alice Wohlgemuth. They were married on Oct. 12th 1952, by his oldest brother, Minister Alfred Barkman at Steinbach MB, sharing 63 precious years. They were blessed with three sons, and then five daughters. Living in Greenland, their first home was upstairs in his parent’s house, later building a small house on the yard. He was a chicken farmer. His sons have good memories of going along on Dad’s egg route, delivering eggs to different customers.

March 31st, 1964 found them saying goodbye and moving to a small congregation at Grandview MB. Here they purchased 3 quarters of land, some of which they cleared. Later they built a hog barn. We recall memories of Dad farming grain and hogs. Favorite recollections are of him clearing the yard and tobogganing behind his Allis Chalmers tractor. He worked hard and long to provide for us. His coming in for coffee breaks and meals was punctual.

They purchased a retirement home in Grandview and later moved to the Maplewood Manor, Steinbach, MB. Dad was left lonely when Mom passed away in 2016. He occupied himself with his computer, woodworking and cooking. Dad’s faithful example is an inspiration to us all. His prayers for his children and grandchildren meant a lot to us. Dad was a quiet man with a sense of humor. We knew where we stood and felt his love and stability.

Preceding him in death were his wife Alice, oldest son Robert, 3 brothers, and 1 sister.

The family is deeply grateful to the Maplewood Manor staff for the excellent care shown to our dad.

To order memorial trees or send flowers to the family in memory of Stanley Barkman, please visit our flower store.