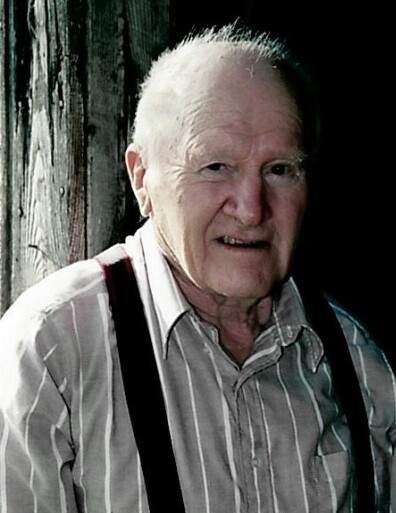 Peacefully, with family by his side, Peter U. Warkentine of Steinbach, MB, formerly of Giroux, MB, passed away at the Rest Haven Nursing Home on Saturday, May 16, 2020, at the age of 94 years.

Peter was predeceased by his son Gerald Warkentine, daughter Shirley Penner, granddaughters Brendalee and Shauna Penner, brothers Albert and Edwin, sisters Dorothy and Caroline, as well as his parents, Henry and Katherine Warkentine.

Dad was born on January 9, 1926 in McTavish, MB and spent his early years in Morris, MB. He looked back fondly on those times. Watching the neighborhood cows and collecting gopher tails, allowed him and his brother Albert to earn enough money to buy a new bicycle and make the occasional trip to the store for 5 cents worth of maple buds (a favorite treat). He would also reminisce about going along with his dad on his mail route.

Dad moved to Plettville as a young man. He was a truck driver for Plett & Co and had many interesting stories to tell. He met a young lady who also worked and lived in Plettville. They fell in love and were married on June 25th 1950. Five children were added to their family.

Dad moved his family to Winnipeg, MB sometime later and started working as a furniture maker. A brain tumor and subsequent surgery necessitated a change in career as his entire left side was not functioning properly. He bought his dad's farm near Giroux and started a new phase in his life. Times were very difficult because many simple tasks were hard for him to perform given his physical limitations. Dad faced many challenges in his life, losing his 17-year-old son Gerald as well his daughter Shirley Penner and two granddaughters Brendalee Penner and Shauna Penner. Through it all he continued to persevere and just kept going. Dad and mom made it work, together with the Lord's help.

Dad lost his good arm in a farm accident on February 14, 1980. He was officially retired. Things got somewhat easier when they sold the farm. Dad and mom would do some traveling mostly with John and Shirley. He also enjoyed mowing their huge lawn and taking afternoon naps.

They eventually moved to a condo in Steinbach and really enjoyed their new place. About 4 years ago dad's deteriorating physical condition dictated a move to the Rest Haven Nursing Home. As with all the difficult changes in his life he accepted this one with a quiet grace. About 1 1/2 years ago, mom joined him in the Rest Haven. Her room was right across the hall from his. This allowed them to be together and greatly enhanced their lives.

We as a family have never heard dad complain even once about his lot in life. He has been a shining example of a man who just wouldn't quit.

When we were little, our dad would sit in a living room chair and we would gather around him and beg him to tell us stories. His made-up stories involved bears, wolves, forests, tractors, and all kinds of fascinating things. He would sometimes tell us stories of his childhood and winning races because he could run so fast. Well dad, we can see you in heaven now running through the grass in your bare feet, doing somersaults, and all the other things you've been unable to do in the last 57 years. Enjoy! We will miss you dad, but we are so happy for you.

A viewing will be held on Wednesday May 20, 2020 from 12:00pm -2:30pm at Crossings Funeral Care. There will be an opportunity to offer your condolences to mom via a video recording. She will be unable to attend due to Covid-19 restrictions. This will be followed by a private family burial at the Ridgewood EMC Cemetery in Giroux, MB.

The family would like to extend their appreciation to all the staff at the Rest Haven Nursing Home. They have done everything possible to make dad and mom feel loved and looked after. A special thank you to Susan Penner who went out of her way to show such kindness to dad. She took him outside for long rides in his wheelchair on her own time. He really appreciated you. The family would also like to express our gratitude to Rob Hiebert from Crossings Funeral Care for his kind, prompt, and compassionate care of us and our dad.

To order memorial trees or send flowers to the family in memory of Peter Warkentine, please visit our flower store.