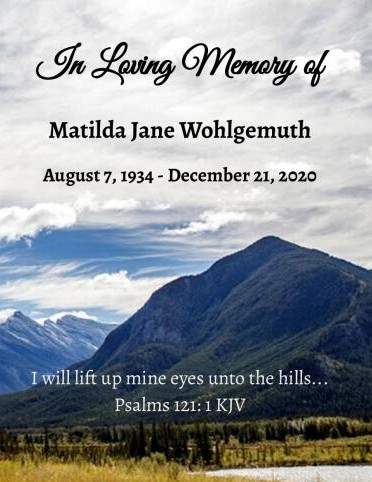 Our dear sister Matilda Jane Wohlgemuth was born to Henry and Edna Peterson Wohlgemuth, in Ste. Anne, Manitoba on August 7,1934. She quietly passed away on December 21, 2020 at Maplewood Manor, Steinbach MB.

Being the oldest of 12 children, her keen intuition caused her to take responsibility, lending a much needed helping hand in the home.

Matilda was converted and baptized into the Church of God in Christ Mennonite on Jan.16, 1947 in Greenland, MB, by Minister John M. Penner.  Her Christian life was meaningful to her which gave her conviction to serve.

Her early growing up years were with her family, in a small French town where she attended school. She completed her high school via correspondence at home, then went to nurses training.

Following her training, she went to serve in Mexico at Camp 45 hospital for two years. Later, two years in Guatemala and also Haiti for a short time. These years were highlights of her life.

Around home, she worked as a nurse at Ste. Anne Hospital, Bethesda Hospital and Resthaven in Steinbach, MB . Also at the Bannatyne Child Care Home, in Winnipeg, MB.

In 1983, Matilda moved to Steinbach with her parents. Later she made the Steinbach Congregation her home and gave herself to the fellowship there.

Matilda had a special rapport with her nieces and nephews, also keenly interested in their spiritual and natural well-being.

She carried a concern for the souls of men right to the end. Seldom would we leave Matilda's home without her requesting a prayer, then also a little exchange or encouragement to be faithful till the end.

She was predeceased by her parents, an infant brother Glenn, sister Leanna, sister-in-law Norinne, and brother-in-law Clifford Bartel.

A private family service will be held at 10:30 am on Sunday, December 27, 2020 at the Steinbach Church of God in Christ. The family invites those who would like to listen to the audio stream of the service, please log into https://listentochurch.com/listen/steinbach or phone 204-594-5903.

In lieu of flowers, donations may be made to Christian Service International PO Box 251 Rosenort, Manitoba R0G 1W0

To order memorial trees or send flowers to the family in memory of Matilda Wohlgemuth, please visit our flower store.