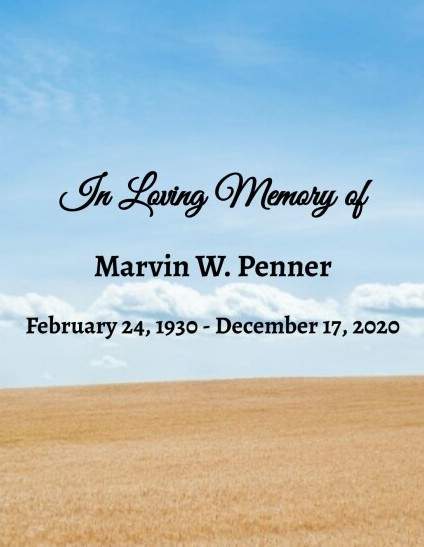 Marvin Warkentin Penner was born on February 24, 1930, to Jacob M. and Anna Warkentin Penner of Greenland, Mb. He peacefully passed away at the Maplewood Manor, Steinbach, Mb., on December 17, 2020, reaching the age of 90 years. He will be laid to rest in the Whitemouth Church Cemetery.

He answered the call of God when he was 12 years old. He was baptized into the Church of God in Christ Mennonite, in Greenland Mb. on December 20, 1942. He remained fixed on his heavenly home throughout his life.

He joined hands in marriage with Luana Goossen on October 18, 1952. They were married for 68 beautiful years. Their first home was in Greenland, Mb. They raised five children and fostered one. In October 1979, they relocated to Elma Mb where he continued farming.

He was a faithful Christian and an example to his children and grandchildren. He loved to hear his grandchildren sing for him at Christmas. He was interested in everyone and liked to chat with his egg customers and tell stories to his grandchildren. He showed his love for others by his patience and generosity. He had a special bond with his brother Martin and spent many hours talking with him on the telephone.

On April 9, 2020, his precious daughter in law, Helena Toews Penner, left this earth to meet her maker.

He was predeceased by his parents, thirteen siblings, his parents in law, six brothers in law, and eight sisters in law.

A private funeral service will be held at 11:00 am on Wednesday, December 23, 2020 at the Maplewood Manor. For those who would like to listen to the service, use the audio stream link: listentochurch.com/listen/whitemouth or Phone 1-(515)724-0004

To order memorial trees or send flowers to the family in memory of Marvin Penner, please visit our flower store.