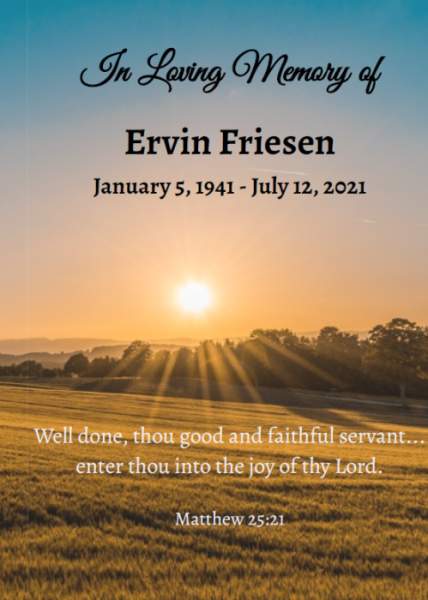 My husband, our father and grandfather, Ervin Friesen, was born January 5, 1941. He passed away peacefully in the early hours of July 12, 2021, surrounded by his family.

Dad was born to Cornelius W and Katherina Penner Friesen on the family farm near Steinbach. He was the eighth in a family of ten children. He gave his heart to God and was baptized into the Church of God in Christ, Mennonite on November 8, 1953. Dad loved the Church and taught us his convictions, as much by example as by words.

Ervin married me, Norma Wiebe, in Linden, Alberta on April 5, 1964. We enjoyed 57 years together, with five sons and two daughters joining us to make up our home. We started out in Steinbach, Manitoba; in 1968, we moved to Roblin, Manitoba, where we farmed until our retirement.

His first job was at Friesen Machine in Steinbach; his machinist skills stayed with him throughout his life. Dad was a wise man of few words, quietly living his convictions. He taught his children to work hard, but also loved going on picnics, drives, and enjoying nature. He was known in the community as a man who could fix almost anything. If an implement was needed on the farm, he enjoyed the challenge of building it himself. In his retirement he enjoyed woodworking and created beautiful pieces that will be forever treasured by many.

Dad loved to travel and took his family to many new places throughout the US and Canada. Special memories were made during a trip to China.

The family would like to thank the staff at Maplewood Manor for their wonderful care during the two years dad was a resident there. Dad suffered from Parkinson’s Disease and we are grateful his last years were peaceful.

To order memorial trees or send flowers to the family in memory of Ervin Friesen, please visit our flower store.