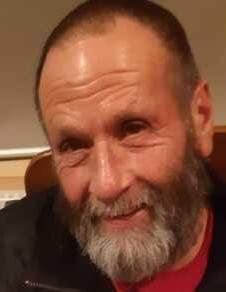 Earl Jacob Penner was born in Brandon, MB and adopted at birth to Marvin and Luana Penner. A special Christmas present. He passed peacefully at the age of 59 in the early morning hours on Friday, August 13, 2021 at the Pinawa Hospital.

Earl was raised in Greenland, MB and in 1979 he moved to Elma, MB with his parents. He attended the Shakespeare School for Grades 1-3, Landmark School for Grade 4, and Greenland School for grades 5- 8. Earl loved to farm. From a young boy on, he worked the land and later in life he drove heavy equipment until he was unable to work due to health reasons. He was a master of all trades; he could fix anything. He loved to joke around and tease his nieces and nephews when opportunity presented itself. Some people said he was a comedian, he loved to spend time with his grandchildren as they were very special to him.

He answered the call of God when he was 24 years of age and was baptized into the Church of God in Christ Mennonite in Whitemouth on March 17, 1985. He had his struggles in life and recently found peace with God after his father’s passing.

On August 25, 1985 he married Shirley Toews and together they were blessed with 3 sons and 1 daughter.

The family would like to extend their sincere gratitude and appreciation to the staff at the Pinawa Hospital for love and care given to Earl for the past 3 months.

To order memorial trees or send flowers to the family in memory of Earl Penner, please visit our flower store.