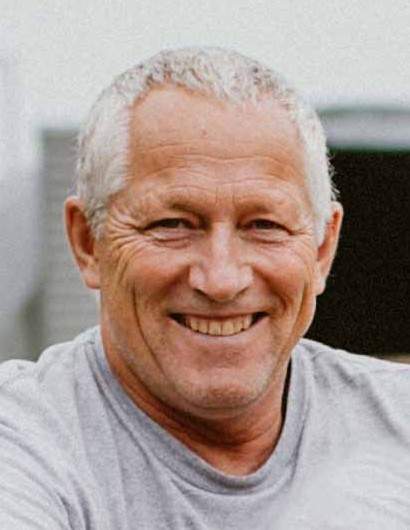 It is with heavy hearts that we announce the passing of our dear husband and father, Del Brandt, on November 24th at the age of 60. Del was predeceased by his parents, Abe and Annie Brandt. He will be deeply missed by LuWanna, his wife of 35 years, his children Joel (Gina), Steve (Leah), Brianne (Andrew), Lindsey (Marshall), and grandkids Emmett, Aria, Liam and Jackson.

Del is the fourth of eleven children. He wasn’t born in a Christian home, he was born at the Gimli hospital. He didn’t talk until the age of three, but he definitely made up for that later. Growing up he and his brothers were always up to something from making a pail of tea in their lean-to fort to administering expired medication to their father’s hogs. He is a proud graduate of the School of Hard Knocks.

His many jobs showed that his second round of grade 2 paid off and that graduating from grade nine was sufficient for him. This list of jobs doesn’t include the many places that Del volunteered and served. He served on the camp board and school board, instigated a men’s retreat, and spent many years on the ministerial committee at Menville EMC.

More important than any job was his love for his family. Del met Lu, the love of his life, at a college and career event at church while living in Winnipeg. He was smitten. In his last weeks he could still recount exactly what she was wearing when they first met. They got married seven months later and raised four children together who he absolutely adored. As his children got married he loved their spouses like his own and as grandkids came along he cherished them deeply.

He called three different communities home over his 60 years and created deep meaningful relationships in each community. Del had an incredible way of loving and befriending everyone he met. He cared deeply for his family, friends, and his Lord Jesus Christ.

*The come-and-go viewing is open to anyone but the in-person funeral will be for fully vaccinated individuals only. A livestream will be available for anyone unable to attend the funeral.

To order memorial trees or send flowers to the family in memory of Delbert Brandt, please visit our flower store.