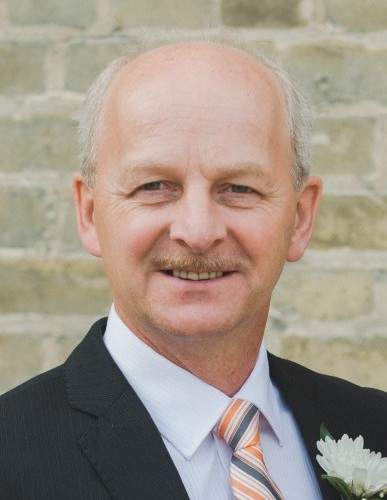 It is with heavy hearts that we announce the passing of Bernie Stahn, age 61, on Wednesday, December 25, 2019 at the Bethesda Regional Health Centre after a 15-month battle with cancer.

Bernie was born on July 29, 1958 in Steinbach, Manitoba. He was the youngest of seven children, growing up on a farm in Mitchell.

Bernie and Sandra met at a young age, both attending Mitchell School. Their relationship started early in life and stood the test of time. They were wed on September 13, 1980 and began their life together in Mitchell. This is where they built their house and raised their children, in the town they have always called home.

Bernie first worked for his father-in-law driving mail truck, which led to a 40-year career with Canada Post; his last title being Local Area Manager Southeastern Manitoba. He was very passionate about the organization which was evident in his work ethic. He continually invested himself in getting to know the employees throughout his area.

Bernie has had a lifelong devotion to his community. This began at a young age by participating in community recreation and coaching various teams. He was elected into the LUD of Mitchell before becoming Councillor of Ward 2 (Mitchell and area) for the RM of Hanover in 2002. This was a huge part of his life until the day he passed. Even while being hospitalized he found ways to partake in meetings and contribute his knowledge.

A celebration of life will be held at 11:00 am on Saturday, January 4, 2020 at the Emmanuel Evangelical Free Church, 360 McKenzie Ave, Steinbach. Viewing will be 1 hour prior to the service. Reverend Terry Gudmundson will be presiding.

The family would like to express special thanks to Dr. Ilchyna and the second-floor nurses at the Bethesda Regional Health Centre, as well as the family and friends who came to the hospital to support them during this difficult time.

In lieu of flowers donations may be made to the RM of Hanover going towards recreation in the community of Mitchell.

To order memorial trees or send flowers to the family in memory of Bernie Stahn, please visit our flower store.