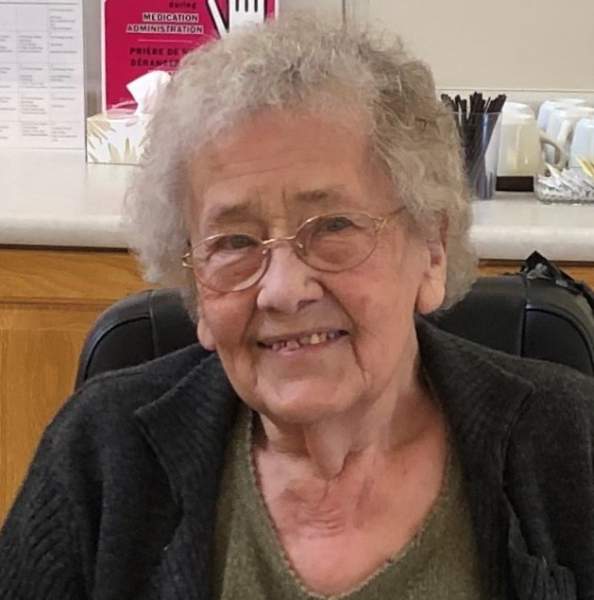 Peacefully, with family by her side Annie Warkentine  of Steinbach MB, formerly of Giroux MB, passed away at the Rest Haven Nursing Home on Friday, December 4, 2020 at the age of 93 years.

Annie was predeceased by her husband Peter U. Warkentine , her son Gerald Warkentine, daughter Shirley Penner, granddaughters Brendalee and Shauna Penner, brother Pete and sisters Tina and Nettie, as well as her parents Frank and Aganetta Giesbrecht.

Mom was born on September 29, 1927 on the family farm near New Bothwell, MB. She had many fond memories of her childhood. Holding the lantern for her brother Pete as he was milking the cows; threshing time, which meant new straw to put in the mattresses, along with baloney sandwiches, a real treat, and helping her mother in the home. Mom was raised with a strong work ethic and she was a hard worker all her life.

Mom met dad while they were both working at Plettville. They married on June 25, 1950 and celebrated their 69th wedding anniversary in 2019. Five children were added to their family. They moved to the farm, near Giroux, MB in 1962. There, mom’s love for gardening really blossomed. She always had a huge garden and could seemingly make anything grow. She also loved growing flowers and received many compliments on her well-kept yard. Mom had many other interests including knitting, crocheting, puzzling and reading.

From looking after dad in his later years to being there for her children and grandchildren, mom was a very loyal person who could always be counted on when the chips were down.

Mom and dad moved off the farm in 2004 and spent 11 wonderful years in their condo in Steinbach. When mom was no longer able to care for our dad, he moved to the Rest Haven Nursing Home and mom moved next door to Woodhaven. This was a difficult time for her but she made the best of it. In January 2019, mom also moved into the Rest Haven and lived across the hall from dad until his passing in May, 2020. She loved the staff at Rest Haven and they loved her. Mom’s health declined after dad’s passing and 7 months later she is now reunited with him. Mom had a good sense of humor and a very quick wit that stayed with her to the end.

The family extends their appreciation to all staff at Rest Haven Nursing Home. Their care and kindness to our mother was so comforting to us. The family also expresses their gratitude to Rob Hiebert, Director at Crossings Funeral Care for his kind, prompt and compassionate care of us and our mom.

To order memorial trees or send flowers to the family in memory of Annie Warkentine, please visit our flower store.